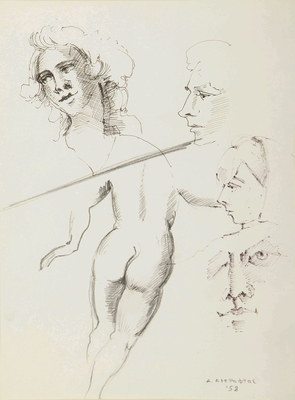 Figures and faces
ink and pencil on paper


sold for 242.84 €
Andreas Asproftas was born in 1919 in Trypimeni and lived until 2004. He graduated from Famagusta Gymnasium in 1937 and then studied at Athens School of Medicine until 1940. While he was there, he also took painting and piano lessons. In 1945, at the end of the war, he returned for a further year to Medical School. In 1960 he received a diploma from the Athens National School of Music, then he travelled to Italy where he studied painting at Academy of Fine Art in Perugia. After his graduation, in1968, he returned to Cyprus and was appointed a secondary school teacher of art and music. A man of many talents, he was employed by the Ministry of Education to teach music, painting and technical drawing. In his spare time, he worked on theatre scenery and book jackets. Meanwhile he painted and eventually exhibited his work in 1961 at the Young Trust Union of Nicosia; 1963, Municipal Building of Limassol; 1967 at Ledra Palace Hotel, Nicosia). Metaphysical matters were of great interest to Asproftas. He formed his own philosophical perception of the world and was a man that loved reading and wanted to fully understand human existence and nature. He liked studying philosophy such as that of Plato and Socrates. Exhibitions that Asproftas participated in include: 1956, 1957 Cyprus Union of Art Lovers, group exhibition.1961solo exhibition, TRUST Youth Union, Nicosia.1962 solo exhibition, Limassol Municipality Hall. 1963 solo exhibition, Ledra Palace Hotel, Nicosia. 1983 solo exhibition, Gloria Gallery, Nicosia.1999 last solo exhibition, Iliotropio Gallery, Larnaca, a tribute to his 60-year contribution to the arts. His work can be found in many public and private collections in Cyprus. Notably at The State Gallery of Contemporary Cypriot Art, The Nicosia Municipality Collection, The Paphos Municipal Gallery, The Limassol Municipal Gallery, The Leventis Gallery, The Bank of Cyprus Cultural Centre-Foundation, The Archbishop Makarios III Foundation-Cultural Centre and The Costas & Rita Severis Foundation. He also participated in all the group exhibitions organized by EKATE in Cyprus and various group exhibitions abroad. Bibliography: Christos Savvidis – Trichas, “Cypriot Artists”, publication Chr. Andreou, Nicosia 1982-83 Andreas Asproftas, “His Known and Unknown Work”, Marina Schiza, EN TIPIS, 2008
Yannis TSAROUCHIS