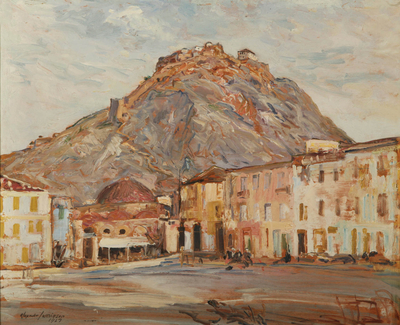 Alexander Jamieson was born in Glasgow, Scotland in 1873 and died in London in 1939. He studied at The Haldane Academy, Glasgow and in 1898 won a Scholarship to study in Paris. He was clearly influenced by the French impressionist movement of the time, in particular Manet. He mainly painted landscapes and town scenes such as this painting here. His first solo exhibition was in 1912 and from 1928 onwards he exhibited at The Royal Academy. His works can be found in many important private and public collections such as: Tate Gallery, Buckinghamshire County Museum, The Ashmolean Museum of Art and Archaeology, Gracefield Arts Centre, Salford Museum & Art Gallery and Newport Museum and Art Gallery
Kostas KOUTSOURIS