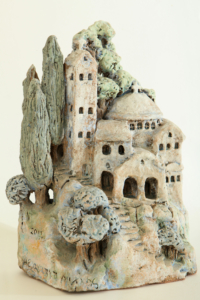 Bambos Michlis was born in Achna, Famagusta in 1947. At the age of 20 he moved to Famagusta where he set up his first studio. He is a self-taught ceramic artist.

His first solo exhibition was at the Lykeion Ellinidon 1969. Since 1974 he has been living and working in Limassol. In 1980 he started the Art Workshop, along with other artists, where local and foreign artists have worked from time to time.

With the opening of his own workshop in 1985 Bambos Michlis worked on ceramic, painting and sculpture where he experimented using various materials.

His inspiration derives from Greek and Egyptian Mythology. His stoneware ceramic is highly expressive in various forms from fruit to symbolic pomegranates to beautiful angels and mythological figures. Beautiful, young women and men, embrace in eternal love. He has taken part in 33 group exhibitions in Cyprus.