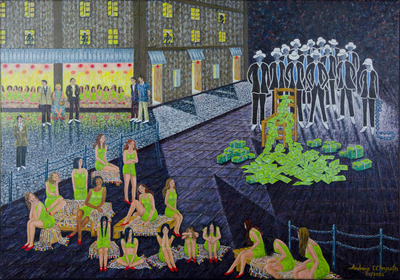 
collection of the artist

NOTES Andreas Chrysafi was born in Cyprus and hosts a Cypriot, British and Canadian citizenship and has lived most of his life in Cyprus, London and Vancouver. He is a prolific artist and a published author of 5 books. He is a thinker, an environmentalist and a keen advocate for Human Rights, Justice and Equality but also a strong believer of Rule of Law. Throughout his life he has been a campaigner against corruption. He has held a number of solo and group exhibitions in Cyprus and his inspiring work has been attracting attention in the art world but also the press where his paintings have been published in magazines and newspapers. About the painting “Dark Bazaar” The intense and sensitive painting "Dark Bazaar" portrays the appalling plight of women trafficking for sexual exploitation and slavery in dark bazaars across the world. Greed, money and mistreatment lurk in sordid places but also in modern-day societies where faceless pillars of the community are often the menacing dark forces of abuse. Viewing the artwork lets the mind drift into a surreal dark setting that triggers inquisitiveness and an awful awareness that touches the inner senses of humanity.
Renos PERICLEOUS