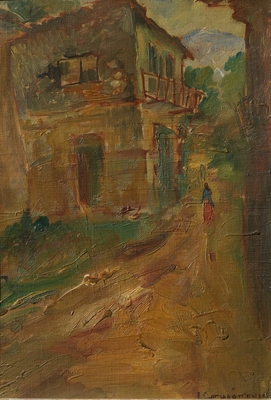 Path through the village
oil on canvas laid down on cardboard

Yiannis Spyropoulos was born at Pylos, Messinia in 1912.

In 1930 he enrolled at The School of Fine Arts, Athens, where he studied painting under Umbertos Argyros, Spyros Vikatos and Epaminondas Thomopoulos.

In 1938 Spyropoulos won the First Prize in a competition organised by The Academy of Athens, which was a scholarship to study in Western Europe. He chose to go to Paris where he attended École Supérieure des Beaux Arts, Colarossi and Julian free academies.

Spyropoulos' painting Anafiotika is one of five works with which he represented Greece in the 1958 Guggenheim Prize International Competition, New York.

In 1959 he was among eight Greek artists selected to represent Greek art in eight American cities. Abstraction being prominent among the works represented.

He was named Commander of the Royal Order of the Phoenix in 1966.