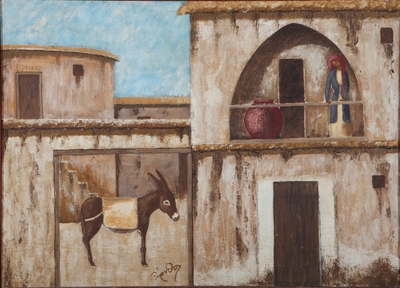 Village scene
oil on board

Xanthos Hadjisotiriou was born in Famagusta in 1920 and died in Limassol in 2003.

He studied painting in London at the Central School of Arts and Crafts from 1951 to 1953.

Hadjisotiriou concentrated on depicting scenery from everyday life. He created a unique visual language through the use of form and colour guided by a personal instinct and influences which included Byzantine Art.

He presented his work in a number of solo exhibitions such as in 1959 in London, in 1962 at Ledra Palace, Nicosia and in 1990 at The Palais de l’ Europe, Brussels.

His work can be found in many public and private collections in Cyprus and internationally, notably at The National Gallery, Athens, The State Gallery of Contemporary Cypriot Art, The Leventis Gallery, The Bank of Cyprus Cultural Centre and The Central Bank of Cyprus Art Collection .
Markos VENIOS