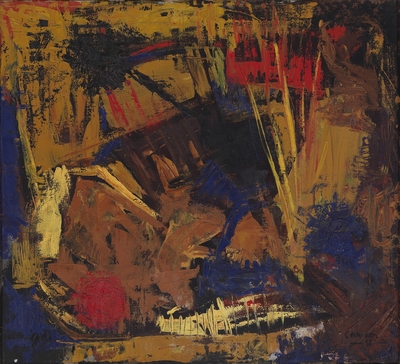 
private collection, Athens
(acquired directly from the artist by the present owner)

Caniaris was born in 1928 in Athens. He died in Athens in 2011. In 1950 he enrolled at The School of Fine Arts, Athens, where he studied under Oumbertos Argyros and the then newly appointed Yannis Moralis. Shortly after graduating Caniaris moved to Rome, where he started experimenting with everyday materials such as metal mesh, wire and plaster, in a similar manner to his Italian contemporaries: Lucio Fontana and Alberto Burri. Soon, the inclusion of pre-formed objects and mannequins in his work decisively confirmed the artist’s notion that “works should be what they are, not a representation but a real object within the space.” In 1969, just two years after the abolition of Greek democracy by the military junta, Caniaris’ exhibition at the New Gallery in Athens, featuring works cast in plaster, provoked sensational reactions. The artist was forced by the regime to leave Athens and go to Paris, where he worked closely with the Nouveau Réalistes. In the early 1970s Caniaris moved to Berlin and started working with ‘environments’. He exhibited in several German museums: Hannover Kunstverein, Kunstverein Heidelberg, Κunsteverein Ingolstadt and Musuem Bochum. At London’s ICA, he exhibited his new body of work, ‘Immigrants’, inspired by the world of workers who streamed into Germany from other, mostly Balkan countries. Caniaris held a number of prestigious solo exhibitions. Notably the 1977 Documenta 6, Kassel, Karl Ernst Osthaus Museum, The Staatliche Kunsthalle, Berlin in 1991, a large retrospective at The National Gallery, Athens in 1999, The Macedonian Museum of Contemporary Art in 2000 and The Benaki Museum in 2008. In 1988 he represented Greece at the Venice Biennale together with Nikos Kessanlis and in 1996 Caniaris participated in the exhibition ‘Face à l’Histoire: 1933-1996’ at the Pompidou Centre, Paris. His works are found in many public and private collections, notably: Tate Modern in London, the SMAK Stedelijk Museum voor Actuele Kunst Gent Belgium, Musée d’Art Moderne de Saint-Étienne, France, the Osthaus Museum Hagen, The National Gallery, Athens, The National Museum of Contemporary Art, Athens and The Macedonian Museum of Contemporary Art.
Renos LOIZOU