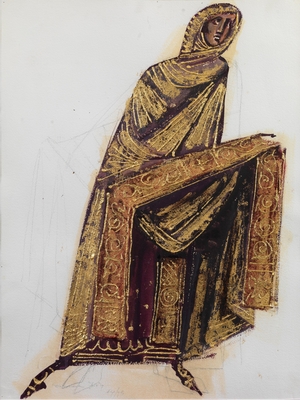 Vassilis Photopoulos was born in Kalamata, Greece and studied painting at a very young age under Vangelis Drakos. He was an artist, film director and set designer. Photopoulos appeared for the first time on the Art scene as the stage designer for the play ‘Servant Lady’, at the Athens Opera House. He also worked for The National Greek Theatre, The Public Theatre of Northern Greece, and The Liberal Theatre. Photopoulos was an Oscar Award winner in 1964 for the set design and costumes of the film ‘Zorba the Greek’ by Michalis Kakogiannis. In 1966 he worked with Francis Ford Coppola for the film ‘You're a Big Boy Now’, which starred Geraldine Page, Rip Torn, Karen Black, Julie Harris and Elizabeth Hartman. His work can be seen in the collections of: The National Gallery, Greece, Ecumenical Patriarchate of Constantinople, Vorres Museum and in a large number of public and private collections in Greece and internationally. ‘Emperor Michael’ by Angelos Terzakis was staged by the National Theatre of Greece in 1978.
Nikolaos SANTORINAIOS