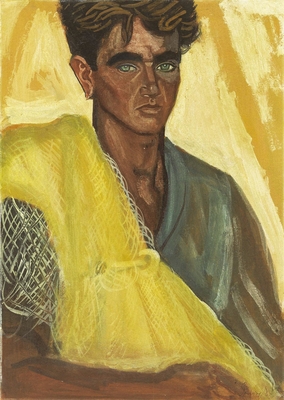 The young fisherman
oil and tempera on hardboard

Valias Semertzides was born in Russia in 1911. His father was of Greek descent and his mother Russian. In 1922, following the Russian Revolution and creation of the Russian Federation, his parents moved to Greece where his father established a Dance School. In 1928 he enrolled at The School of Fine Arts, Athens where he studied painting under Constantinos Parthenis, a figure whose influence is evident in his early works. Between 1923 and 1937 Valias Semertzides gave dance lessons in his father’s school and worked primarily on poster art and book illustration. Between 1937 and 1940 he exhibited with ‘Ελεύθεροι Καλιτεχναι’, a group of communist artists that included Alexandros Koroyiannakis, Demetris Yioldasis, Costas Plakotaris and Dimitrios Davis. During the German occupation of Greece, Semertzidis was an active member of the Greek resistance and fled to the mountains to fight the Nazi regime. This was an influential period that inspired his great later works that showed the hardship endured by Greeks during this period. His work after the war is divided into two parts: capturing the everyday life of the lower classes and landscape painting. From 1964 to his death he spent much of his time on the island of Rhodes where he worked on large scale fresco works for public buildings and hotels, inspired by the island’s landscape.
Christos CHRISTOU