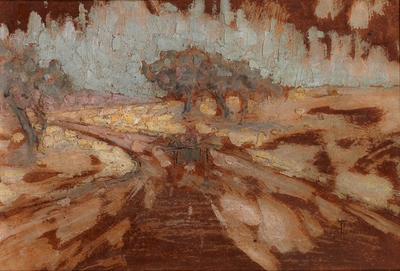 Theofrastos Triantafyllidis was born in Smyrna in 1881.

He studied painting at The School of Fine Arts, Athens, under Georgios Jacobides. In 1908 he moved to Munich and continued studying with L. von Lofftz, just for a year, and then moved to Paris.

He studied Economics in Paris. This was because of pressure from his family who were concerned about painting being a financially reliable profession. However whilst he was there he was involved in the Parisian art world, at an important time when the modern movement was developing. He studied the French museums’ collections’ masterpieces and continued studying art at the workshop of D. Lucas.

In 1912 he enrolled in the Greek army and fought in the Balkan Wars. After the war ended he moved to Athens and for a short time shared a studio with Konstantinos Maleas. In reality their ‘studio’ was situated in the countryside where every morning, before sunrise they went out to catch the early morning light. A year later Maleas moved to Thessaloniki but Triantafyllidis stayed behind.

In 1917 he was one of the founding members of the group ‘Ομάδα Τέχνης’, together with Nikolaos Lytras, Konstantinos Maleas and Constantinos Parthenis. He was among these progressive artists that broke away from academism.

Triantafyllides became one of the for-runners of the modern movement in Greece together with Nikolaos Lytras and Georgios Bouzianis.