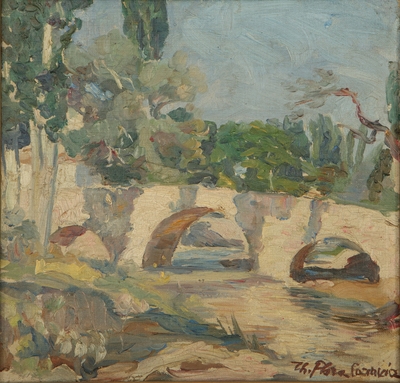 Ancient bridge at Ikonio
oil on canvas laid down on board

Thalia Flora-Karavia graduated in 1888 from Zappio School for girls in Constantinople. At the time women were not allowed to study at The School of Fine Arts, Athens, so Flora-Karavia moved to Munich and for three years studied with the notable Greek artists Nikolaos Gysis and Georgios Jakobides. She simultaneously attended classes in drawing and colour with P. Nauen, A. Azbe and W. Thor. In 1898 she returned to Constantinople where she began her career in painting. Later, in 1907, she married N. Karavias, publicist of the newspaper Εφημερις, and settled down in Alexandria, Egypt, where she lived the next 30 years. In Alexandria, as well as continuing her artistic career, Karavia established an Arts School that proved to have great influence in the area. Her work is influenced by the Munich school and by post impressionism, and is characterised by simplicity, sincerity in execution and a strong brush stroke. Karavia travelled extensively and exhibited her work in Greece, Asia Minor, Europe and the USA. In 1940 she moved to Athens where she lived the remainder of her life. Her works are found in many public and private collections, notably: The National Gallery, Athens, The Athens Municipal Gallery, The Leventis Gallery, Nicosia, The Koutlides Collection, The Averoff Gallery, The National Bank of Greece, and so on.
Spyros VASSILIOU