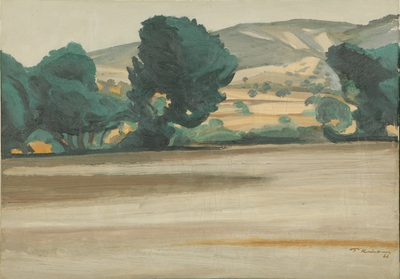 Kanthos was born in Alona and died in Nicosia. From an early age he was distinguished in drawing and painting. He studied at the Higher School of Fine Arts, Athens between 1929-1932 and 1934-1938. His teachers in drawing and painting were Umberto Argyros, Demetri Mbiskinis, Spyros Vikatos and Konstantinos Parthenis. He also studied printmaking under Yannis Kefallinos. In 1950 he traveled to London where he stayed for six months and in the years that followed he visited European cities, where he renewed his contact with contemporary art. Kanthos was one of the first Cypriot artists who organized solo exhibitions in Cyprus. In 1931 he organized an exhibition at The Emporiki Leschi in Nicosia and in 1934 at The Athletic Club Anorthosis of Famagusta. Other one-man shows were organized in 1940 at the Athletic Club APOEL, Nicosia, in 1959 at Trust Club, Nicosia, in 1973 at Argo Gallery, Nicosia, in 1979 at Zygos Gallery, Nicosia and in 1983 at Famagusta Gate, Nicosia which was organized by The Ministry of Education. Solo exhibitions were also organized in Greece: notably in 1972 at the Hilton Gallery, Athens and later in 1982, a large retrospective exhibition at The National Gallery of Greece. His work can be found in many public and private collections in Cyprus. Notably at The State Gallery of Contemporary Cypriot art, The Leventis Gallery, The bank of Cyprus Cultural Centre Foundation, The Central Bank of Cyprus Art Collection, The Hellenic Bank Cultural Centre, The Limassol Municipal Gallery and The Archbishop Makarios III Foundation-Cultural Centre.
Georges COSMADOPOULOS