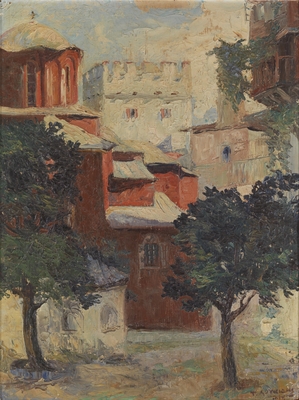 Tassos Loukides was born in Smyrna in 1884. He studied at The School of Fine Arts, Athens, and in 1908 he continued his studies in Paris with F. Cormon and Etschevery. Loukides created both secular (non-religious) and ecclesiastical art, the second being icon and fresco painting. His ecclesiastical art was influenced by the Byzantine tradition and the neo-renaissance, examples of which can be seen in his many church commissions both in Greece and France. In his book Αττική. Ελληνικά Χωρικά Κεντήματα, (published in Athens, 1937), Loukides compiled studies of traditional Greek embroidery designs. He participated in a number of prestigious group exhibitions such as the 1911, 1912, 1913 and 1914 Société des Artistes Français, Paris. His works are found in many public and private collections in Greece and internationally, notably: The National Gallery, Athens, The Athens Municipal Gallery and The National Bank of Greece.
Demos SKOULAKIS