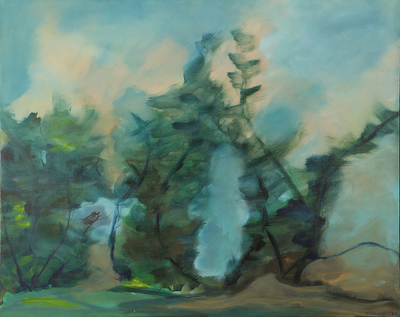 The agony of planet earth
acrylic on canvas


collection of the artist’s estate, Nicosia

Tasos Stephanides was born in Nicosia in 1917. He graduated form the Pancyprian Gymnasium in 1935. In his early age became author and he published the anthology “Anxieties” in 1955 and the novel “The Son of the Waters” in 1960. He also published many poems and short-stories, and he involved in theatre art and literary criticism. During the Second World War he wrote reviews for theatre. From 1959 until his death in 1996 he devoted a large part of his life to painting. He was one of the member founders of Pancyprian Art-Lover’s Society, of EKATE and of the Cypriot Authors company. His work was presented in one-man exhibitions: in 1964 at Trust Club in Nicosia; in 1979 at Acropolis Gallery in Nicosia; in 1980 at Zygos Gallery in Nicosia; in 1981 at Curium Palace Hotel in Limassol; at Nees Morphes Gallery in Athens; in 1995 at Rembrandt Gallery and Ora Gallery in Nicosia; and in 1996 with a retrospective exhibition of his work at Kasteliotissa Gallery in Nicosia. Tasos Stephanides participated in many group exhibitions: at the exhibition of the group Pancyprian Art-Lover’s Society and at Apophasis Gallery owned by Christophoros Savva in 1955 and 1960; at the Panhellenic Exhibition of 1967 in Athens; at Alexandria Biennale in 1968; at the exhibition “Contemporary Cypriot Art” at Commonwealth Institute in London and Edinburgh in 1970; at the Touring Exhibition of Cypriot Painting in 1981 in Eastern Countries; in 1983 in Paris; and at the “Cyprus 1974-1984, Evidence and Deposition” exhibition. His work can be found at the State Gallery of Contemporary Art and in private collections. Bibliography: Christos Savvidis-Trichas, Cypriot Artists, Chr. Andreou publications, Nicosia 1982-83; Chrysanthos Christou, Short History of Modern and Contemporary Cypriot Art, Nicosia 1983; Eleni Papademetriou, State Gallery of Contemporary
Polykleitos RENGOS