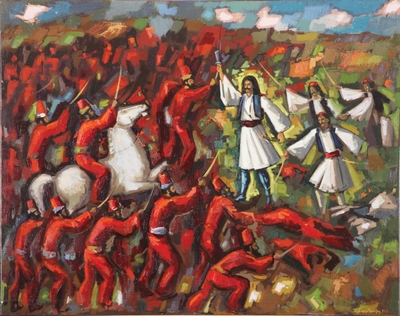 On a scholarship from the Dutch government he went on to study in the areas of fresco, stained glass and mosaic at Rijksakademie van Beeldende Kunsten, Amsterdam under W. Clenin. Then, on a scholarship from The University of Athens he studied at the École des Beaux-Arts under J.C. Aujame and at École des Métiers d’Art under A. Giroux. During this time he travelled extensively, visiting museums and seeing contemporary art in Holland, Belgium, France and Italy. He held many solo exhibitions in Greece and participated in a number of group exhibitions internationally such as in the1957 and 1971 Alexandria Biennale, in 1962 at the Musée d’Art Moderne, Paris and in 1962 at the Salon de l’Art Libre, Paris.

In 1973 he won the Academy of Athens Award for his book ‘The Aesthetic Categories in Contemporary Art’.

He was given important commissions, such as creating stained glass for the Athens City Hall, a mosaic for the church of Agios Panteleimonas Acharnon, and a work for Floisvos Marina which comprised of coloured bricks and ceramics covering an area of 1000 sq. m.

He has also created many sculptural monuments and busts, erected in public spaces, such as in Samothrace, Santorini, Lemnos, Glyfada, Kamena Vourla, Piraeus, Volos, and Thessaloniki.

His work can be found in The National Gallery of Greece, The Municipal Gallery of Athens, and many other public and private collections
Takis PARLAVANTZAS