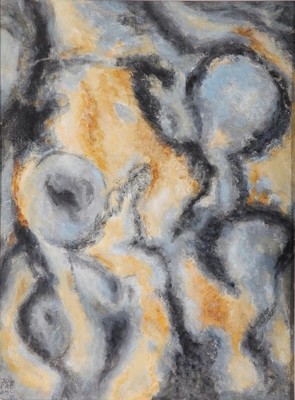 He studied Law at the Aristotle University, Athens and attended The School of Fine Arts, Athens for two years (1920-1921) studying under Georgios Jakobides and Vikentios Boccheciampe.

After graduating, Frangoudes travelled extensively in Europe visiting numerous museums. He was greatly influenced by the work of Constantinos Parthenis which triggered him to further explore the modern movements of the time.

Frangoudes is best known for producing Orphistic work. Orphism was rooted in Cubism but moved towards a pure, lyrical abstraction, where painting was seen as the convergence of pure colors. More concerned with the expression and significance of abstraction, this movement changed from recognizable subject matter to rapidly becoming absorbed by increasingly abstract structures. Orphism aimed to convey recognizable subject matter and to rely on form and colour to communicate meaning.

His work can be found in many public and private collections in Cyprus and Greece. Notably at The State Gallery of Contemporary Cypriot Art, The Limassol Municipal Gallery and The Bank of Cyprus Cultural Centre Foundation.
Apostolos GERALIS