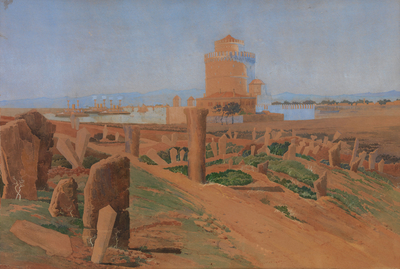 The port of Thessaloniki
watercolour on paper

Stefanos Lantzas was born in Athens and was the son of renowned painter Vikentios Lantzas.

He studied at The School of Fine Arts, Athens, where he took up a part time teaching position in 1894, and later became full time in 1909, until 1932.

His work is typical of the academic art of the period. He work is a continuation, in spirit, to that of his father, where his themes consist mainly of ancient monuments such as the Acropolis, the Lysikratis monument, the Temple of Olympian Zeus, Thissio and so on.

He participated in numerous exhibitions in Athens and in Egypt. He was awarded the bronze medal at the 1888 Olympia exhibition.

His work is found in many public and private collections, notably: The National Gallery, Athens; The Athens Municipal Gallery; The Leventis Gallery, Nicosia; The Koutlides collection and The National Bank of Greece collection.
Apostolos GERALIS