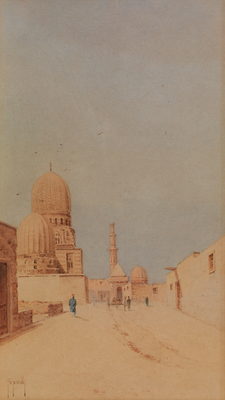 Street in Cairo
watercolour on paper

Spyridon Scarvelli was born on the island of Corfu where he was first taught art at The Corfu School of Art. He later continued his studies in Trieste and Rome.

On his return to Corfu, he worked with other artists on the fresco decoration in the Achilleion - the summer residence of Elisabeth of Bavaria, also known as Sissy.

For a period Scarvelli lived in Egypt where he painted a number of his works.
Scarvelli worked mainly in watercolour, a medium in which he excelled. He was predominantly a landscape artist inspired by Corfu and Egypt. He is characterised by his sharp brush stroke, creating atmospheric works that explore varying light and colour, whilst emitting a poetic tone.