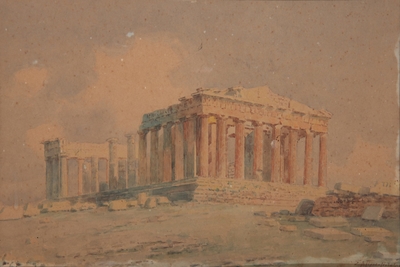 The Parthenon
watercolour on paper

He was first taught art by his father and later studied at The School of Fine Arts, Venice.

From 1866 he briefly taught at The School of Fine Arts, Athens, and then again from 1876 till his death.

Prosalentis’ work, like that of his peers of the time, is defined by academism. During the reign of George I of Greece he decorated the chapel of The Old Palace in Athens.

In the1870 Olympia exhibition he was awarded the Gold Medal, second class.

His work is found in many public and private collections, notably that of: The National Gallery, Athens; The Athens Municipal Gallery; The Averoff Gallery; Koutlides; The National Bank of Greece and The Aristotle University, Athens.
Aristides VAROUCHAS (VARUCCA)