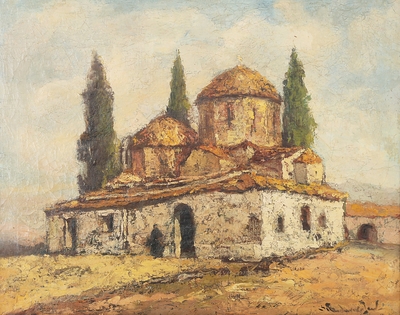 Spyridon Papanikolaou studied at The School of Fine Arts, Athens from 1927 till 1932 under Th. Thomopoulos. He was then Thomopoulos’ studio assistant until 1937.

From 1937 onwards he focused on painting and also set design for the Greek National Theatre and other theatres. From 1960 to 1965 he studied iconography alongside Photis Kondoglou.

Papanikolaou’s paintings have an impressionist feel. He mainly worked on landscapes, seascapes, still-life and portraiture. Additionally he completed many ecclesiastical fresco commissions such as the church of Panagia Kapnikarea in Athens and the church of Hagios Demetrios in Ampelokipoi.

His work can be found at The National Gallery, Athens; The Museum of the City of Athens; The Averoff Gallery and in many private collections.
Pavlos SAMIOS