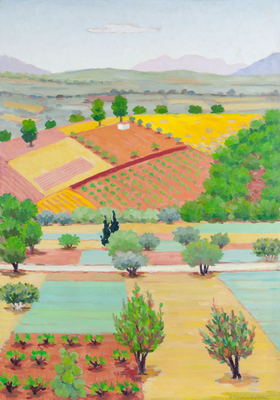 NOTE Sotos Papaspyropoulos was born in Athens in 1919. He studied at the Athens School of Fine Arts with some of his teachers being Parthenis, Mathiopoulos, Biskinis, Thomopoulos and Argyros amongst others. He graduated from the Athens School of Fine Arts in 1940. In his career, he held numerous solo and group exhibitions including one at the Famagusta Gate in Nicosia, Cyprus in 1988. After he died in 2001, over 40 paintings were donated by his spouse to the Athens International Airport “Eleftherios Venizelos”. These paintings were placed on permanent display at selected spaces in the Airport's Administration Building to be viewed by the airport’s employees as well as numerous visitors.
Andreas CHARALAMBOUS