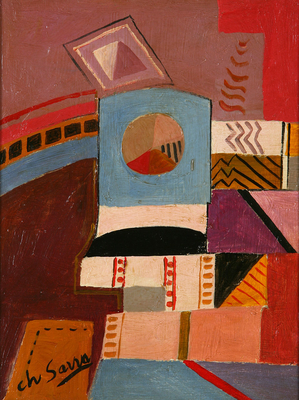 From the introduction to the Christoforos Savva Retrospective Exhibition16 March - 9 May 2010, by Dr Antonis Danos   "Christoforos Savva is a unique case in recent Cypriot culture. Many factors contribute in pronouncing him the most important creator in modern Cypriot art. It was he who introduced contemporary artistic trends, which he brought into a creative dialogue with local traditions; thus he became the link between the first two generations of artists, functioning, at the same time, as a reference point for younger ones. Moreover, he was among the pioneers of the modernisation of the local cultural scene, by rallying together creators from various fields into associations, and by establishing spaces (most important of which, Apophasis Gallery) that housed important (often progressive) activities. The life, the art and the other activities of Savva, testify to a unique personality, and to an artist who creatively assimilated various traditions, and who instinctively and open-mindedly approached contemporary trends, which he introduced into Cypriot art. They also testify to a man who was among the pioneers of the island’s cultural modernisation. During this course, not only he had not been underappreciated or neglected (as it often erroneously claimed), but on the contrary, he was respected and admired from early on, by fellow artists of both the earlier and his own generation (and later on, by younger ones), many of whom, together with creators from other fields, gathered around him in a collective effort for cultural renewal. In the decades following his death, his oeuvre came to be universally acclaimed”.
Victor IOANNIDES