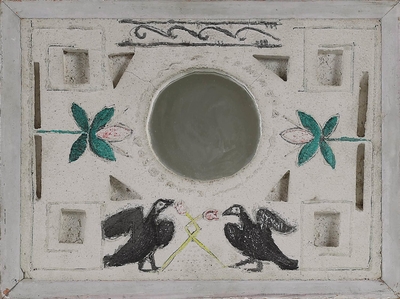 Christoforos Savva was born in Marathovouno in 1924 and died in Sheffield in 1968. He served at the Cypriot Regiment during Second World War. In 1947 he went to London and studied Art at St. Martin’s School of Art and at Heatherley’s School of Art since 1953. He returned to Cyprus in 1953, but in 1956 he left again for Paris, where he studied at André Lhote Academy till 1959. In 1955 he founded the “Art-Lovers’ Society” and in 1960, after he returned to Cyprus, he co-founded Apophasis Gallery with Glyn Hughes, an important cultural centre of the newly-founded Cypriot Democracy. Christoforos Savva has shown his work in one-man exhibition: in 1954 at British Council Hall in Nicosia; in 1955, 1957, 1959 and 1960 at Ledra Palas Hotel in Nicosia; in 1956 at “Art-Lovers’ Society” in Nicosia; in 1958 at Municipal Palace of Limassol; in 1961, 1962 and 1963 at Apophasis Gallery; in 1962 at Beirut and Municipal Hall of Paphos; in 1965 at Municipal Hall of Nicosia; in 1967 at Hilton Hotel in Nicosia; and at Goethe Institute in Nicosia. After his death, seven posthumous exhibitions were organized of which the leading two were retrospective and organized by the Cultural Services of the Ministry of Education and Culture and Christoforos Savva Foundation, in 1988 and 1993 at Famagusta Gate in Nicosia. He took part in several group exhibitions during 1955, 1959, 1961, 1964 and 1967 in Cyprus; in 1958 at Mariac Gallery and Jordan Gallery in Paris; in 1960 at Beirut; in 1967 at the Panhellenic Exhibition; in 1968 at Venice Biennale, in 1962 at “Art in the Commonwealth Today” exhibition which took place at Commonwealth Institute in London; in 1970 at “Contemporary Cypriot Art” at Commonwealth Institute in London; in 1979 at “Demetria” of Thessaloniki; and at “Contemporary Cypriot Painting” at Athens National Gallery. His work can be found in public and private collections in Cyprus: at State Gallery of Contemporary Cypriot Art; Nicosia Municipality; Cultural Centre of Popular Bank; Bank of Cyprus Cultural Centre; and Louki Papaphilipou collection. It can also be found in Christine Savva-Duroe’s collection in United Kingdom. Bibliography: Costas Ikonomou and Christine Savva-Duroe, Chr. Savva, His Life and Work, Cultural Services, Ministry of Education. Nicosia 1988; Alaxandros Xydis, Exhibition Catalogue Contemporary Cypriot Art, National Gallery, Athens 1984; Christos Savvidis-Trichas, Cypriot Artists, Chr. Andreou, Nicosia 1982-83; Chrysanthos Christou, Short History of Modern and Contemporary Cypriot Art, Nicosia 1983; Eleni Papademetriou, State Gallery of Contemporary Cypriot Art, Ministry of Education and Culture, Cultural Services, Nicosia 2002.
Christoforos SAVVA