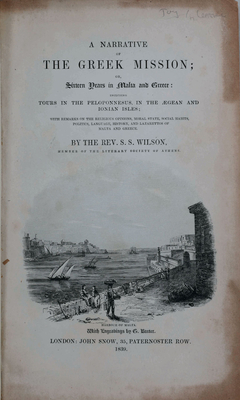 A Narrative of the Greek Mission OR Sixteen Years in Malta and Greece
including tours in the Peloponnesus, in the Aegean and Ionian isles

Samuel Sheridan Wilson was born in Manchester, England. From 1818 he dedicated himself to the mission. In 1819 he went to Malta. There he learned Greek and worked in the English Church. Whilst in Malta he preached in the Orthodox Church and promoted the establishment of a Greek school.In 1824 he traveled to the Ionian Islands. During the same year he also traveled to the rest of Greece visiting amongst other places, Athens, the Peloponnese, Hydra and Spetses. In 1825 he returned to Malta and founded the Greek printing house there of the London Missionary Society, which operated until 1835. In 1838 he returned to England.
BLAEU Cyprus Map