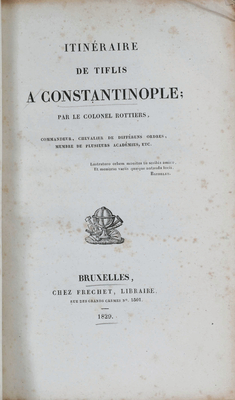 Bernard Eugene Antoine Rottiers who was born in Antwerp, was a Flemish-Dutch soldier, author and collector of antiquities. The three “Rottiers collections” brought together by him form an important part of the basic collection of the Rijksmuseum van Oudheden in Leiden. Whilst under the service of King William I of the Netherlands, in 1824, Rottiers proposed to the king to undertake a trip to Greece with the aim of purchasing antiquities there. The king and government agreed and made Rottiers available a warship and money. The journey lasted a year and a half and covered most of the years 1825 and 1826. Rottiers was accompanied during this trip by his youngest son Victor and the painter Petrus Josephus Witdoeck.
Louis Palma di CESNOLA