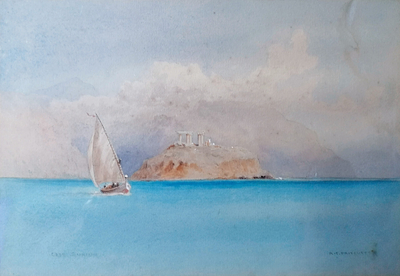 Robert Taylor PRITCHETT was the son of Richard Ellis Pritchett, head of the firm of gunmakers at Enfield which supplied arms to the East India Company. Having joined the Victoria Rifles corps in 1853 he regularly lectured on gunlocks and rifles. Art meanwhile became one of Pritchett's pursuits. He exhibited at the Royal Academy amongst other places and had created many sketches for “Punch” magazine and for other publications. In 1880 he cruised round the world with Mr. and Mrs. Joseph Lambert in their yacht the Wanderer and illustrated their book on 'The Voyage of the Wanderer'. He then joined as artist the tours of Thomas and Lady Brassey in the Sunbeam yacht, and many of his drawings appeared in Lady Brassey's books. Lady Brassey was a well-known traveller and writer who wrote many books of her travel accounts including “Sunshine and storm in the East” or Cruises to Cyprus and Constantinople.
Pericles PANTAZIS