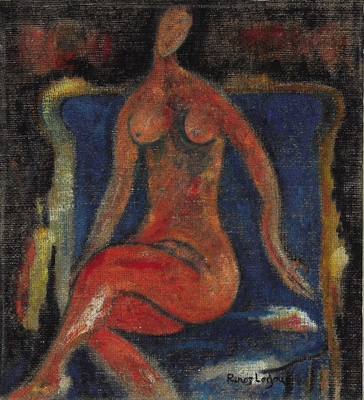 
the collection of Suzanne and Christopher Hull, London
purchased from the above by the present owner

Renos Loizou was born in Cyprus. He lived and worked in his adoptive town of Cambridge, where he has permanent exhibitions in numerous Cambridge college collections, as well as at the famous Jim Ede Collection at Kettles Yard where he had a one man show in 1983 and he has frequently been exhibited at the Royal Academy. In his monumental nudes pose no such threat. Reminiscent of the nudes of Picasso and Matisse (Blue Nude, 1907), but essentially Loizou, they flow magnificently across the handmade paper as though they were landscapes themselves. With confident economy of line, he manipulates perspective, making his solitary nudes seem about to burst out of the confines of their boundaries, leaving their vivid blue backgrounds behind. In 1965 he travelled to Spain, Italy and Greece and begun a series of drawings and paintings. In 1969 he had his first solo exhibition in Cambridge where Jim Ede bought three of his works which was added to the infamous Kettles Yard Collection. Jim Ede of Kettles Yard, Cambridge was to remain one of his greatest patrons. Solo exhibitions included: Fitzwilliam College, Cambridge, 1969, Leigh Gallery, Cambridge, 1970, Caius College, Cambridge, 1972 and Kettles Yard, Cambridge, 1974. Group exhibitions included: 1974 I.C.A., London, 1976 Orangery, Cologne, 1979-80 -81-82-83-84-86-87-97-98 Royal Academy, London, 1987 Chicago International Art Exposition USA, 1994 Royal College of Art, London, Art Gallery and Museum Kelvingrove, Glasgow, 1997, 1998 The Hunting, Observer Prizes. Renos Loizou works are included in important public collections such as: Kettles Yard, Cambridge, Fitzwilliam College, Cambridge, Gonville and Caius College, Cambridge, Magdalene College, Cambridge, State Gallery of Contemporary Cypriot Art, Arts Council, Denmark, The University of Surrey, BP Collection, Baring Bros, WH Smith plc, King’s College, London and Bank of Cyprus Cultural Centre Foundation.
Christos CARAS