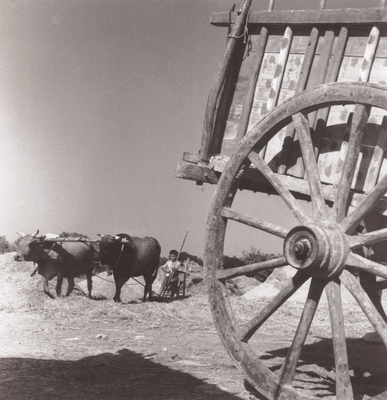 Reno Wideson The discerning eye behind the viewfinder is that of Reno Wideson – retired Head of BBC TV Film Operations – who left Cyprus in 1959 to work in London. Now in his late 90s, Wideson has probably taken more photographs of his homeland, over a longer time frame, than any other photographer.   His photographs of Cyprus fall into six basic categories: Townscapes & Landscapes; Rural life; Ecclesiastical; Historical; British Colonial; Traditional arts & crafts.   Lot 66 Lot 68 and Lot 69 were exhibited at his retrospective exhibition at Gallery K in 2007. They were selected from his massive archive of about 10,000 slides and negatives of Cyprus, out of a total collection of about 35,000 images. The photographs in Flashback are not glamorous guide book views, but iconic black and white shots of village and agricultural life taken half a century ago, when the island was a rural idyll, rather than a tourist haven.   In 2001 the Bank of Cyprus Cultural Foundation,published the book titled ‘GEORGIOS POLYVIOU RENO WIDESON PHOTOGRAPHIC DOCUMENTATION, where it show the strong influenced his photography had on the artist, Lot 66 is illustrated on p. 23 of the book.   Wideson’s photography, recording the diversity and character of his environment and its people resulted in numerous exhibitions and three books; Cyprus in Picture (1952) and Portrait of Cyprus (1955), culminating in 1992 with his magnum opus: Cyprus, Images of a Lifetime. The images are iconic: the bearded priest in a long black cassock, wending his way down the steep pathways through white villages dozing in the afternoon heat far from the crowds and the odour of Ambre Solaire.   Intrinsically beautiful in purely artistic terms, the photographs represent a Mediterranean way of life that has ceased to exist. As such they provide a unique historical and sociological document of the island.   According to author Lawrence Durrell in his forward to Cyprus in Picture: “Wideson is a sort of poet of the camera and uses the lens as an extension of the human eye, but an eye trained and refined to take in and interpret what it sees.” These pictures evoke a sense of nostalgia – even if one has never set foot on Cyprus; they intrinsically capture the quintessence of our past, wherever we have come from.
Renos Evriviades WIDESON