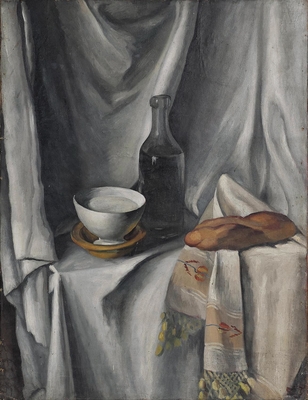 
collection of the artist’s estate, Thessaloniki


Included in “ΠΟΛΥΚΛΕΙΤΟΣ ΡΕΓΚΟΣ” Double edition published by Ianos 2016 – double spread coloured photograph of the work ‘Study in white’ on page 169. This particular painting is reviewed by Katerina Perpinioti-Agazir on page 47.
It is also the subject of a story (in Rengos’ memoirs on page 120) about the hard times he and his wife had in Paris. He recalls his wife being hungry and wanting to eat the loaf of bread pictured in the painting, but Rengos not allowing her to do so until he finished the painting.

Polykleitos Regos was born on the island of Naxos in 1903. In 1913 he moved to Thessaloniki with his family. In 1920 he enrolled at The School of Fine Arts, Athens, where he studied painting under Spyros Vikatos Dimitrios Geraniotis, Georgios Jakobides, Georgios Roilos and Nikolaos Lytras. In 1926 he visited Mount Athos for the first time. The landscape and art in Athos would influence his later work. In 1930 he married painter Georgia Mandopoulou and the same year moved to Paris where they lived until 1935. There he attended painting classes at Académie de la Grande Chaumière and Colarossi. He also studied wood engraving with Demetrios Galanis. In 1933 he returned to Mount Athos and in 1934 in Paris he published: Mont Athos, Gravures sur bois, with wood engravings and a preface by C. Diehl. In 1935 he returned to Thessaloniki with his family. He painted many subject matters and experimented with many techniques, merging different styles and traditions, as a result he is considered to be the most representative artist of the so-called ‘Thessaloniki School’. Among his most famous paintings are Lavra Monastery (1935-40), Portrait of the Artist’s Wife (1940-44), Greco’s House at Toledo (1951-60), and Grigoriou Monastery on Athos (1971-80). Polykleitos Regos exhibited his work in numerous group and solo exhibitions in Greece and abroad.
Christoforos SAVVA