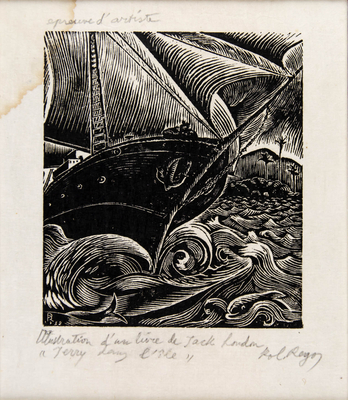 Jerry of the islands by Jack London, c.1932
3 engravings (to be sold as one lot)


Directly from the artist’s family, Greece


at the YMCA of Thessaloniki (Χριστιανική Αδελφότητα Νέων Θεσσαλονίκης), December 1993

NOTE Polykleitos Rengos lived in Paris from the end of 1930 until June 1933 where he studied at the Académie de la Grande Chaumière and Colarossi. To broaden his horizons, he also studied engraving at the Dimitrios Galanis workshop. In 1932 he was commissioned to illustrate “Jerry dans l' île” a French version of the book “Jerry of the Islands” by Jack London.
Christos FOUKARAS