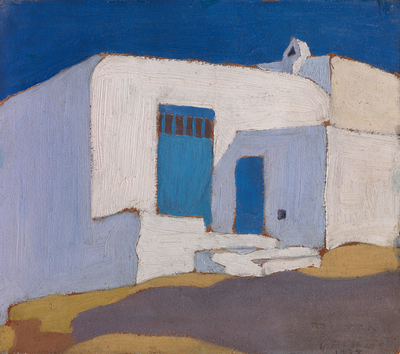 Houses in Myconos
oil on hardboard

We are grateful to Mr Constantinos Regos, son of the artist, for his assistance in cataloguing this work.

Polykleitos Regos was born on the island of Naxos in 1903. In 1913 he moved to Thessaloniki with his family.

In 1935 he returned to Thessaloniki with his family.

He painted many subject matters and experimented with many techniques, merging different styles and traditions, as a result he is considered to be the most representative artist of the so-called ‘Thessaloniki School’. Among his most famous paintings are Lavra Monastery (1935-40), Portrait of the Artist's Wife (1940-44), Greco's House at Toledo (1951-60), and Grigoriou Monastery on Athos (1971-80).