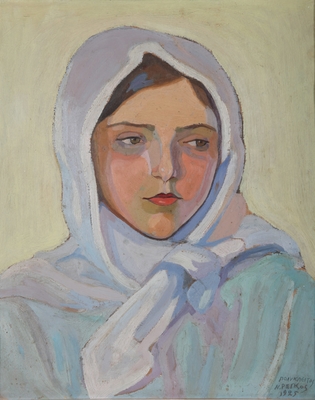 inscribed by the artist on the reverse: εξετέθη στην Εθνική Πινακοθήκη Αθηνών 1980 & στο Βαφοπούλειο Πνευματικό Κέντρο 1983 Θεσ/νικη. Πολύκλειτος Ρεγκος ….
bears a label from The National Gallery of Greece (numbered no 2 and titled) on the reverse
35 x 30 cm

Polykleitos Regos was born on the island of Naxos in 1903. In 1913 he moved to Thessaloniki with his family.

In 1935 he returned to Thessaloniki with his family.

He painted many subject matters and experimented with many techniques, merging different styles and traditions, as a result he is considered to be the most representative artist of the so-called 'Thessaloniki School'. Among his most famous paintings are Lavra Monastery (1935-40), Portrait of the Artist's Wife (1940-44), Greco's House at Toledo (1951-60), and Grigoriou Monastery on Athos (1971-80).

Το Μαριάκι (little Mary)is a work from the early period of the artist, 1925-1930, a time of apprenticeship and initial experimentation. Most of the portraits done at this time bear clear signs of the teachings of Nikolaos Lytras and influences of Byzantine art.

Rengos himself, when asked about his portraits, used to say: 'To do a portrait, a real portrait, there must be love or at least compassion'

Georgios M. Papailiakis (Crete,1883 – Thessaloniki,1943) was a lawyer, writer, bibliophile and collector of antiquities and works of art. He fought in the Balkan War and was married to Baroness Vera von Stein. He was the uncle of well known lawyer George A. Papailiakis (1914-1985) and brother of former mayor of Thessaloniki, Yannis Papailiakis. In 1947 and in 1974, his brother’s wife donated his collection of antiquities consisting of ancient coins, statues and jewellery to the Archaeological Museum of Thessaloniki. Georgios M. Papailiakis was a close friend of Greek artists: Polykleitos Regos, Michalis Economou and Alexander Barkoff.
Polykleitos REGOS