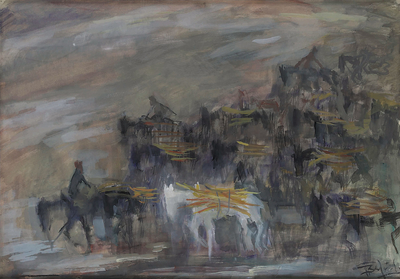 Mules in Metsovo
gouache on card

Pericles Byzantios was born in Athens, a son of an army officer, Konstantinos Byzantios and Meropis Samarniotaki.At the age of 19 he left for Munich, Germany with the intention of studying law. However he soon decided to interrupt his law studies and left for Paris where he studied painting at the school of fine arts “Ecole des Beaux Arts” and at the Academy Julian. After Paris he returned to Greece.During the period 1921-2 he served as a “war artist” in Minor Asia covering the Greco-Turkish war along with two other well-known artists, Spyros Papaloukas and PavlosRodokanakis. In 1922 works from this period were exhibited at Zappeion in Athens and in turn in Smyrni. Unfortunately all the work was lost during the great fire and the catastrophe of Smyrni. Pericles Byzantios was one of the founding members of the art group “Ομάδα Τέχνης” with whom he participated in exhibitions in 1919, 1920 & 1930. Also in 1928 he was again one of the founding members of the Art Club “Atelier”. In 1934 along with the painter Alekas Stylou-Diamantopoulou founded the first private art painting school in Athens, which operated successfully until the fall of Greece to the Germans. In 1939 he took over as director of the Hydra branch as well as the Delphi branch of the Athens School of Fine Arts. Apart from painting Pericles Byzantios was also involved in set design including set designing for the National Theatre and as a cartoon artist for newspapers and publications. During his career Byzantios exhibited in many solo and group exhibitions in Greece as well as abroad including the Venice Biennale in 1934 and the Paris International Exhibition in 1937. In his early creations one finds works influenced by the French artistic tradition. Scenes from life, portraits and landscapes are part of his work. During his artistic career one can see in his work a transition from realistic to more impressionistic works.
Andreas KRYSTALLIS