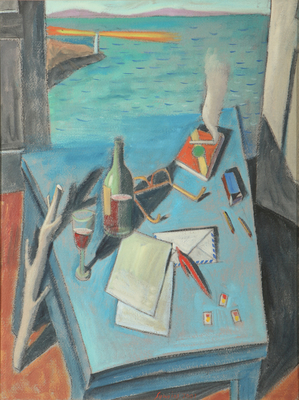 Materials from the inside world
oil on hardboard

Pavlos Samios was born in Athens in 1948. He studied at The School of Fine Arts, Athens under Nikolaou and Moralis. He has held more than 20 solo exhibitions in Greece, Paris and London. He has participated in more than 15 group exhibitions, most of them in France. In 2002 The Foundation for Hellenic Culture in New York held a retrospective exhibition of his work. He has been a professor at The School of Fine Arts, Athens since 2000 in the Workshop for fresco, Byzantine icons and manuscripts. Takis Theodoropoulos comments on this series of paintings by Samios titled Materials from the inside world: However, to return to the picture of the table, which from painting to painting seems like an obsession, it is clear that a ‘symbolic’ reading is not quite right. Is it the insignificance of the objects which is responsible for this? Is it the organization of the space? What is certain is that these objects mark out their own space more than they symbolize a universe which is outside them. It is as if you have to do with one of those makeshift museums which archaeologists set up to their excavations in order to organize a first classification of their finds. In these the corners are not at right angles, because the objects which they are called upon to describe or to protect are pending on the borderline between the certainty of their existence and the uncertainty of our knowledge.They have come out of the earth, but the silence which envelopes them, doubt about their future-no one yet knows whether they will go into the showcases or the storerooms of the great museum-still clothe them with the inwardness of the space within. The subject of the space of Pavlos Samios is precisely this state of suspense, this point in time on the cusp- of the moment when the shape rises from within you, to leave its trace on reality. Each object even the most insignificant, becomes in this way the fragment, the shell of a Protean inner world, a shadow which has emerged into the light and has caught fire.
Maria PAPACHARALAMBOUS