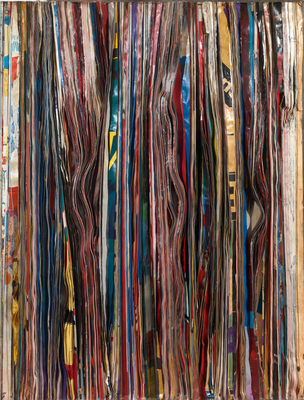 Pavlos was born in Filiatra, Peloponnese in 1930.

In 1947 he moved to Athens, and in 1949 he enrolled at The School of Fine Arts, Athens, where he studied under Yiannis Moralis.

In 1954 after graduating, he spent a year studying at Academie Grande Chaumiere, Paris on a scholarship given to him by the French State. During this time he visited many museums and galleries in Europe.

Between 1955 and 1958 he worked in Athens in the fields of advertising and theatre.

In 1958, on a scholarship from the State Scholarships Foundation of Greece, he went to Paris for a period of three years. There he was exposed to The New Realists set up by Pierre Restany and saw work by Giacometti, Calder, Cesar, Dubuffet and others.

Printed paper was his primary material of choice used in his art: mostly posters machine cut into fine strips. The arrangement of strips forms undulating surfaces, where colours and material unite. These early works were in abstract form. However, when he fully developed his technique, he began to use it to create figurative images or objects, three dimensionally, to the point of visual illusion. Occasionally he used other materials too, such as steel wool or ribbons, but always with the same craftsmanship and inventiveness.

He has also created environments, spatial installations (Curtains, Columns, Forest, Flags) and visual art events where the public interacted. His elaborate and imaginative images often negate the material aspect of their construction, subjecting a metaphysical sensation.

His work can be found in: The National Gallery of Greece, The Macedonian Museum of Contemporary Art, Centre George Pompidou, Paris, Musée d’Art Moderne, Paris, Neue National-gallerie Berlin, Museum of Modern Art, New York and many other public and private collections.
Apostolos GERALIS