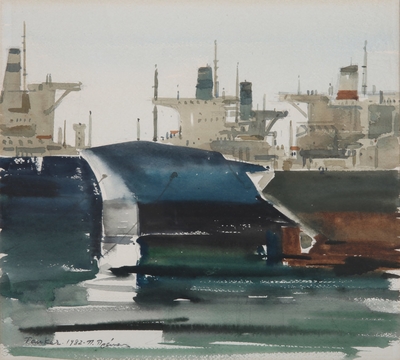 Paris Prekas was born in Athens in 1926.

In 1948 he enrolled at The School of Fine Arts, Athens, where he studied under Umbertos Argyros, Dimitris Biskinis and A. Georgiades.

A multitalented creator, Prekas worked in the mediums of painting, sculpture and architectural decor both interior and exterior.

In painting he worked mainly in oil and watercolor. His work is influenced by the ancient Greek world, the Greek landscape and seascape. He created the series ‘Portraits of Greece’ from the late fifties till 1965, he then painted ‘Ports’ and ‘Horses’ in the 1970s.This work is from the series ‘Tankers’ from the 1980s.

Prekas held many solo exhibitions in Athens and participated in a number of prestigious international group exhibitions such as: the 1956 Young Artists of the Near East, USA; the 1959 Paris Biennale; the 1960-1965 Salon de l’Art Libre, Paris; the 1965 Sao Paolo Biennale; the 1967 Alexandria Biennale; the 1970 Osaka Expo; the 1971 at Upper Grosvenor, London; the 1982 Salon Comparaisons, Paris and the 1983 at The Museum of Modern Art, Vienna.

His work is found in many public and private collections, notably that of: The National Gallery, Athens; The Athens Municipal Gallery; The National Bank of Greece; The Averoff Gallery and The Greek Embassy, Washington.
Pavlos SAMIOS