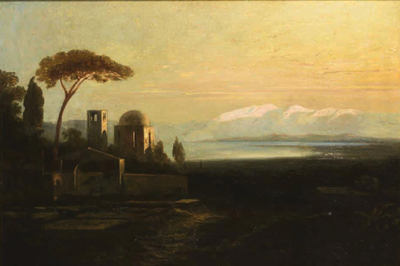 A rare mid-19th century depiction of the tower of Regina, Paphos seen in the foreground to the left (the tower nowadays lays in ruins) with Crysochous bay further back and the Troodos Mountain range and Mount Olympus in the background. The artist had travelled to Cyprus in 1846 providing us with this unique painting of a Cypriot scene. A version of this painting can also be found in the collection of the Costas and Rita Severis Foundation. Johann Andreas Von HERRENBURG was born in Berlin in 1824 and died there in 1906. He studied in the Berlin academy under Professor Karl Eduard Biermann. Herrenburg was principally known as an architectural and landscape artist. In 1845 he travelled to Greece and the following year in 1846 to Asia Minor, Persia, Syria and Cyprus. Whilst in Cyprus he drew the first complete map of the Orient. During the year of 1847 he travelled to Egypt and Abyssinia before returning to Berlin. On his return journey he visited Italy and Paris, France. In 1848, he travelled to England where he rented a studio in Kensington, London and stayed until 1855 at which time he returned to Germany. During his life he continued to travel, visiting amongst other places Norway, Sweden, and Italy.
Alexandros ALEXANDRAKIS