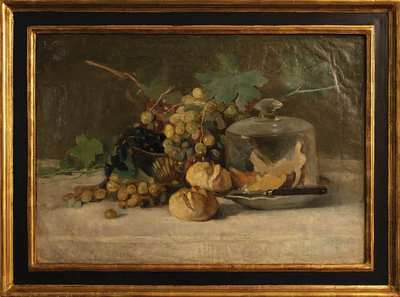 Pericles Pantazis was born in Athens in 1849 and studied at The School of Fine Art, Athens under Nikiforos Lytras, between 1866 and 1871.   He continued his studies for one year at the Munich Academy of Fine Art and moved to Marseille to be taught by Gustave Courbet and Antoine Chintreuil. In 1873 Pantazis moved to Brussels where he became a member of an anti-academic artistic group called Circle de la pâte (the circle of colour), and a member of Les XX. In 1878 he represented Greece at The International Art Biennale of Paris. He died in Brussels before he turned thirty-five from chronic tuberculosis. His works can be found in many notable private and public collections such as: The Royal Museum of Fine Arts, Antwerp - Royal Museum of Fine Arts of Belgium, Brussels - Sint-Niklaas, Stedelijk Museum, Belgium - The National Gallery, Athens and The Leventis Gallery, Nicosia, Cyprus.   Pericles Pantazis is well known for his superb oils. Still life with grapes which originally belonged to his sister is a fine example of his work.
Dimitris YEROS