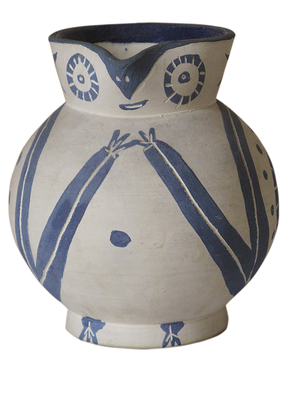 At the end of the 1940s, Pablo Picasso (Spanish, 1881–1973) started creating ceramic works. At the time, Picasso spent his summers on the Cote d’Azur in the South of France. Following earlier trips to the Riviera, where he was inspired by the clarity of the light and the bright Mediterranean colours, the artist visited Vallauris for the annual pottery exhibition in 1946. Impressed by the quality of the Madoura works, he was introduced to the owners, Suzanne and Georges Ramié, who welcomed him into their workshop, and gave him access to all the tools and resources he needed to express his creativity with ceramics. In exchange, the Ramié family would produce and sell his ceramic work. This collaboration with the local ceramicists spanned 25 years. Picasso went on to create clay pieces throughout the last years of his life. He initially found that working with clay was a relaxing summer respite from the more strenuous demands of painting. He began with simple utilitarian objects, such as plates and bowls. He then proceeded to create more ambitious forms, such as pitchers and vases, where the handles became facial or anatomical parts of the animal depicted. The subjects are very creative and playful, and include Greek mythological figures, animal shapes, such as owls and fishes, corrida scenes, and face motifs, among others. What is the state of the auction market for Picasso ceramics? Over the past 15 years, the market for Picasso ceramics has steadily grown, with seasoned collectors and new buyers alike vying for Picasso’s editioned and unique ceramics at auction. This market is stable, with a steady high sell-through rate and prices that are still lower than the rest of Picasso’s work. The broad range of estimates and sales prices help make this market attractive to many collectors, but also explain the high average sales prices, which are skewed by a few exceptional pieces.   About 70 years ago, when Picasso began creating ceramics in collaboration with the Madoura Pottery workshop, he intended the pieces to be accessible and affordable. As such, he created some works in editions of 500 or more, and made them available for purchase directly from the workshop. Today, Picasso’s ceramic works are still readily accessible, available at auction, in art galleries, and in the private market. Contributing to the availability of these works is the current demand for them, which has steadily grown over the past 15 years. This is the result of a number of factors. First, the general rise of the Picasso market has contributed to the availability of these works. Today, Picasso remains one of the highest-grossing artists at auction. Second, the increase in the market for Picasso originals has resulted in a number of buyers being “priced out.” Thus, a number of these ceramic works have replaced the desire for more costly and sought-after unique paintings, drawings, and sculpture. The affordability of Picasso ceramics has long been maintained by major auction houses. Because of the large catalogue of Picasso ceramics produced—over 600 wares in a 25-year span—it has not been difficult to source Picasso ceramics for auction. This has resulted in their pricing at fairly modest estimates, which creates competition and often yields results above high estimates. These above-high-estimate results have naturally earned the attention of other Picasso ceramic collectors, who in turn may become consignors in future auctions. For major auction houses, sourcing these works is not difficult. In fact, many houses like Christie’s and Sotheby’s may limit the number of works they offer in each sale, whether it is a prints and multiples sale or an Impressionist and Modern Art sale, where these works are generally sold. Because there is less competition for Picasso ceramics, auction houses have been able to bring the pieces to auction at relatively low estimates, with the exception of the unique, rare, or large ceramics. Exclusive sales dedicated to Picasso ceramics have become increasingly popular over the past few years, and these have certainly contributed to the perception of a growing market. Christie’s South Kensington held a sale in June 2012, entirely dedicated to the Madoura Collection of Picasso ceramics, which had an exceptional 100% sell-through rate for the 500 lots in the sale, with a total sales volume of US$12,584,141, or 58% of the total Picasso ceramics sales volume in 2012. Results like this have called into question the current approach to pricing ceramics. Are the major auction houses pricing works too low? Are private collectors’ investments not being properly protected by offering up their ceramics at lower-than-average prices? Or is this strategy of pricing works at low and desirable estimates an auction house tradition that is working, or even growing the Picasso ceramics market? excerpts from Fanny Lakoubay and Conner Williams "The Story Behind Picasso's Ceramics" Artnet News (2013)
Monika VERIOPOULOS