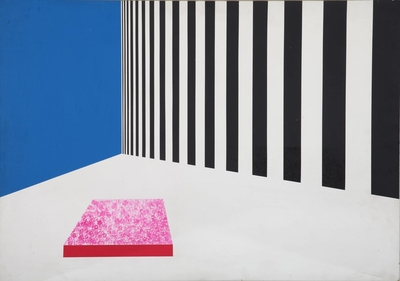 Corner
latex and vinyl on panel

Zouni’s work can be placed in the genre of geometric abstraction, influenced by ancient Egyptian and Greek architecture as well as the Bauhaus. Her work emits a sense of the third dimension within a two dimensional plain and although concretely geometric, a distinguished kind of lyricism is achieved.

Zouni held a large number of solo exhibitions in Athens and participated in a number of prestigious international group exhibitions such as the 1970 Salon des Indépendants, Paris; the 1970 Alexandria Biennale; the 1973, 1974, 1979 Salon de la Jeune Sculpture, Paris; the 1978 Art Basel; at The National Gallery of Ireland, Dublin in 1979 and the 1979 Sao Paolo Biennale.

Her work is found in many public and private collections, notably that of: The National Gallery, Athens; The Athens Municipal Gallery; The National Bank of Greece; The Averoff Gallery; The Macedonian museum of Contemporary Art; The B & E Goulandris Museum of Modern Art and the Musée Cantonal des Beaux-Arts, Lausanne.
Stefanos LANTZAS