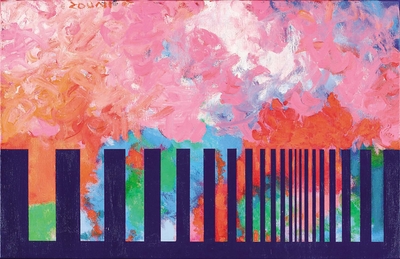 Opi Sarpaki Zouni was a Greek international artist who was born in Cairo in 1941. Her family's roots originate from Crete and Santorini. She lived and worked since 1963 in Athens. She died in 2008. Opy Zouni studied in Cairo at the Studio Zorian from 1959-1962, ceramics at the American College, 1960-62 photography in Athens 1959-60, painting at the Athens School of Fine Arts, at the studio of the famous artist and professor, Yiannis Moralis1963-68 and Stage-designing, 1967-69. She had more than thirty three solo exhibitions and thirty seven group exhibitions. Many of her artworks belong in famous Museums all around the world as well in private collections. PUBLIC COLLECTIONS The National Gallery of Athens The Ministry of Culture, Athens The Cabinet des Estampes, Genève The Musée Cantonal des Beaux-Arts, Lausanne The Beograd Contemporary Art Museum The Ministerie Van de Vlaamse Gemeenschap, Brussels The Museum of Contemporary Art, Antwerpen The National Bank Foundation, Athens The B.& E. Goulandris' Museum of Modern Art
Giorgos LANITIS