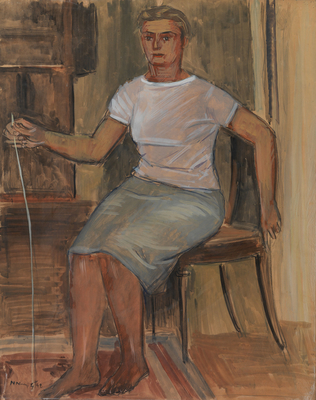 Nikos Nikolaou was born in Hydra in 1909.

In 1929 he enrolled at The School of Fine Arts, Athens, where he studied painting under Constantinos Parthenis and Umbertos Argyros.

In 1937, a year after graduating, together with his friend Yiannis Moralis, he moved to Rome and later Paris to further study.

In 1960 he moved to the island of Aegina where he was often visited by artists, intellectuals and art lovers.

He worked on many fresco commissions and illustrated numerous books. In 1986, after his death his book ‘Η περιπέτεια της γραμμής στην τέχνη’ was published. The book discusses theory, experimentation and his experiences in art.

The human figure is the main subject matter of Nikolaou’s work. His work is influenced by ancient Greek, Roman and Egyptian Art as well as by Greek Folklore.