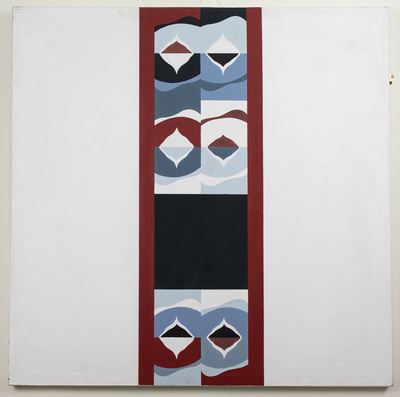 Nikos Kouroussis was born in Mitsero in 1937 He studied art in London, at Saint Martin’s School of Art from 1960 until 1961 and at Horsney College of Art from 1961 until 1964. In 1977 he was awarded with a scholarship from the British Council and he took stage design lessons in London, while in 1986 as a holder of a scholarship from Fulbright Institute he went to U.S.A. where he gave lectures and made research. In 1976 and 1988 gave a series of lectures at the Pratt University in New York and at the South Dakota State University. He was specialized in stage and costume design. As a Stage designer he worked at the Cyprus Theatrical Organization, the National Theatre of Greece and the Deutsches Theatre of Berlin. Also, he experimented with the art of video. In 1989 he made the videotapes: Video U-matic; Computer Interaction; Metamorphosis; 3D Computer Animation; and Kandisky’s square into cube. He has shown his work in several one-man exhibitions, of which the most significant are: in 1967 at the Technical School in Nicosia; in 1970 at Lydra Pallas Gallery in Nicosia; in 1972 at the Goethe Institute; in 1973 at Desmos Gallery in Athens; in 1974 at Kuppers Gallery in Neuss in Germany; in 1975 at the “Labyrinth No. I” exhibition at the Municipal Theatre on Nicosia, in Cologne and at Tanz Forum Gallery under the name “Labyrinth 2”; in 1977 at Desmos Gallery in Athens; in 1979 at Night Gallery in London; in 1982 at the Municipal Theatre in Nicosia under the name “Labyrinth 2” and at the Pratt Institute in New York under the name “Labyrinth 3”; in 1986 at Psichico Art Gallery in Athens; in 1987 at Narahja Gallery in Cologne; in 1991 at Diaspro Art Centre in Nicosia; in 1992 again at Diaspro Art Centre under the name “Art and Creativity”; in 1997 with a retrospective exhibition of his work at Diaspro Art Centre; in 1998 at Argo Gallery in Nicosia with the theme “The Silent Scream of the City”; in 2001 at Morphi Gallery in Limassol under the name “Sacred Prostitution” and at the Diatopos Art Centre with the establishment “Metamorphosis” in Nicosia; and in 2002 with a retrospective exhibition of his work at the Cultural Centre Melina of Municipality of Athens. He participated in many group exhibitions. The most important exhibitions took place: in 1968 at India Triennale in New Delhi; in 1969 at Young Artists Biennale in Paris and at Hilton Gallery in Athens; in 1970 a the Commonwealth Institute in London and at Ora Gallery in Athens; in 1971 at Ateneo Gallery in Madrid, at “Contemporary Cypriot Art” exhibition in Belgrade and at Sao Paulo Biennale; in 1972 at the Engraving Biennale in Venice; in 1974 at Desmos Gallery in Athens; in 1975 at the 11th International Graphics Arts Biennale in Ljubljana; in 1976 at the 3rd International Engraving Biennale in Norway, at the National Gallery in Athens, the Macedonia Art Centre and at the 4th International Engraving Biennale in Fredrikstad of Germany; in 1979 at the “Contemporary Cypriot Art” exhibition in Thessaloniki; in 1980 at the 5th International engraving Biennale in Norway; in 1983 at “Contemporary Cypriot Art” exhibition in Paris; in 1984 at Printemps De La Jeune Creation in Paris and at Alexandria Biennale; in 1988 at Sculpture Symposium in Volos; in 1990 at Venice Biennale; in 1995 in Municipal Arts Centre in Nicosia and at Pierides Gallery in Athens; in 1997 at the group exhibition titled “ Three Artists, Three Pathways” at Diaspro Gallery; in 1998 at House of Cyprus in Athens; in 2000 two exhibitions titled “Greek Engraving Panorama” and “From Smili to Ilectron – 100 years of engraving” were organized at the Municipal Arts Centre in Nicosia in collaboration with the Pierides Gallery. Bibliography: Tonis Spiteris, Three Centuries of Greek Art, Athens 1979; D. Fotopoulos, Greek Stage Design, Athens 1987; Cypriot Artists, Chr. Andreou Publications, Nicosia 1982-83; Chrysanthos Christou, Short History of Modern and Contemporary Cypriot Art, Nicoisa 1983; Eleni Papademetriou, State Gallery of Contemporary Cypriot Art, Ministry of Education and Culture, Cultural Services, Nicosia 2002.
John SABRY