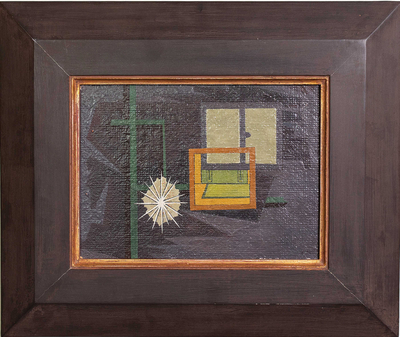 
Gift by the artist to the present owner

Nikos Hadjikyriakos-Ghika was born in Athens in 1906. As a young boy Hadjikyriakos-Ghika showed an early inclination to drawing and while still at school he attended art lessons with Constantinos Parthenis.   In 1922 he moved to Paris where he studied French literature and Aesthetics at the Sorbonne. Two years later he enrolled at the Academie Ranson and studied painting under R. Bissière and etching with D. Galanis.   He first exhibited in Paris in 1923 at the Salon des Tuileries and the Salon des Surindépendants. In 1927 he held his first solo exhibition at the Galerie Percier in Paris. His first Athens exhibition was shared with sculptor Michael Tombros at the Strategopoulos Gallery in 1928. In 1930 he settled in Paris and returned to Athens four years later a respected artist.   Between 1935 and 1937 he edited the periodical ‘The Third Eye’ together with architect Pikionis, the poet Papatzonis and the director Karantinos. In 1937 he restored the ancestral home of the Ghikas family in Hydra, where he painted the first works in which he expressed his artistic style decisively, combining elements of Cubism with nature, light and the architecture of Greece.   He was appointed Professor of Drawing at the National Technical University of Athens School of Architecture in 1941, and continued to teach there until 1958.   In 1961 he married Barbara Hutchinson , who had been previously married to Victor Rothschild, 3rd Baron Rothschild and to classicist Rex Warner.   In 1972 he was elected a regular member of the Academy of Athens and in 1986 an honorary member of the Royal Academy of Arts in London. He was also granted honorary doctorates by the School of Architecture at the University of Thessaloniki in 1982 and by the University of Athens School of Philosophy in 1991.   More than fifty exhibitions of Hadjikyriakos-Ghika’s works have been held in Athens, Paris, London, Geneva, Berlin and New York.   Hadjikyriakos-Ghika was also involved in designing stage sets and costumes for theatrical works such as Aristophanes’s Clouds at the National Theatre of Greece (1951) and Comédie Française (1952) and Gide’s ballet Persephone, with music by Stravinsky in Covent Garden (1961).   He also illustrated a number of books, including N. Kazantzakis’s Odyssey, Longos’s Daphne and Chloe and C.P. Cavafy’s Poems. His writings include several books, studies and articles on architecture and aesthetics, as well as treatises on Greek art.   His work can be found in The National Gallery of Greece, The Municipal Gallery of Athens, The Leventis Gallery, The National Bank of Greece, the Musée d’Art Moderne in Paris, the Tate Gallery in London, the Metropolitan Museum of Art in New York and many other public and private collections.
Nikos ENGONOPOULOS