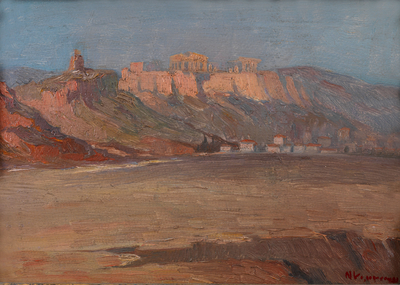 A view of the Acropolis
oil on hardboard

Nikolaos Kalogeropoulos studied theology at The Rizareio School and The University of Athens. Later he moved to Munich where he continued his theological studies and at the same time studied painting and history of art, independently.

His themes included landscapes, portraiture and still lifes but most importantly marinescapes. Many of these are housed permanently in The Hellenic Maritime Museum and are testament to his contribution to Greek art in this genre of painting.

Kalogeropoulos followed in the footsteps of two great Greek maritime artists, Constandinos Volanakis and Vasilios Chatzis. His work differs from his predecessors as he broke away from academism and was influenced by impressionism. He uses a simple colour palette, soft brushstrokes and evokes a romantic tone influenced by J. Vernet.

He held the position of assistant manager for both The Byzantine Museum and The National Gallery, Athens. He was the head of The Professional School of Piraeus and also headed the department of Arts and Education for The Ministry of Education and Religion.