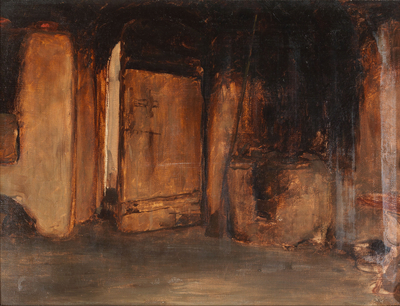 Interior with stove
oil on hardboard

the present work is one of three works by Gysis acquired in 1968 by the parents of the present owner in Hamburg, from the collection of a Greek diplomat in Germany.

a second work from the same series titled Eros and the Painter is illustrated in the book by Dr Nelli Missirli. Γύζης, Εκδόσεις Αδάμ-Πέργαμος, Αθήνα, 2006, image 4, page 41. This work was auctioned by Bonhams in 2006.

Nikolaos Gysis was born in the village of Sklavochori, on the island of Tinos in 1842.

In 1850 his family moved to Athens. As a young boy Gysis showed an early inclination to drawing and at the tender age of eight attended art lessons at The School of Fine Arts, Athens. In 1854 at the age of twelve (when it was legal to start studying) he officially begun his studies and graduated ten years later. This formed the foundation of his artistic education.

Later, in 1865, on a scholarship from the Panagia Evanghelistria of the Tinos Foundation, he moved to Munich to continue his studies at The Royal Academy of Fine Arts. He mostly lived in Munich for the rest of his life. Gysis, artistically,rapidly integrated into The Munch School, and became one of its most characteristic representatives in Greek art. This can be seen in the painting News of Victory of 1871, which deals with the Franco-Prussian War, and in the painting Apotheosis of Bavaria.

At the beginning of the 1870s Gysis returned to Greece where he lived for a few years. During this time he produced a series of paintings with more avowedly Greek themes, such as Carnival in Athens and Engagement Ceremony.

Together with Nikiforos Lytras, he travelled to Asia Minor in 1873 and then to Paris in 1876.

From 1886 onwards he was a professor at The Academy of Fine Arts, Munich, in which time his work gradually evolved from detailed realistic depictions to singular impressionist compositions. Towards the end of his life, in the 1890s, he took a turn towards more religious themes.

His work is housed in prominent museums and private collections in Greece, Germany and elsewhere.
Zoe ZENGHELIS