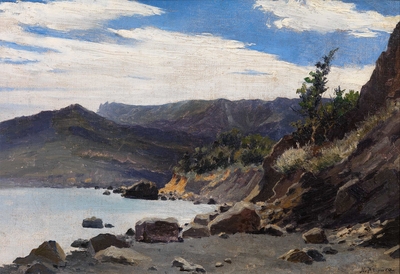 Nikolaos Cheimonas studied painting at The Imperial Academy of Arts, St. Petersburg, under Arkhip Kuindzhi, a pupil of Ivan Aivazovsky.

After graduating in 1897 he travelled with a group of Kuindzhi’s students to Berlin, Dresden, Vienna and Paris. On their travels they visited many European museums and studied historical western art.

Cheimonas taught at The Imperial Academy of Arts, St Petersburg until 1918.

In 1919, during The Russian Civil War, his wife Olga was arrested by the new government for transferring messages written by political prisoners. His attempts to free her failed and only further endangered him, so he sought refuge with relatives in Crimea and eventually emigrated to Greece in 1920. A few years later Olga was freed and was able to join him in Greece.

In 1929, they moved to the island of Skyros where he died of malaria after being incorrectly diagnosed and treated. Later that year Olga presented a major retrospective of his work in Athens and the following year in London.

His work exudes his deep knowledge of European Art, not just Russian but nineteenth century French realism and impressionism. He depicted Greek nature, its atmospheric variations and light graduations in a sound, masterly manner.