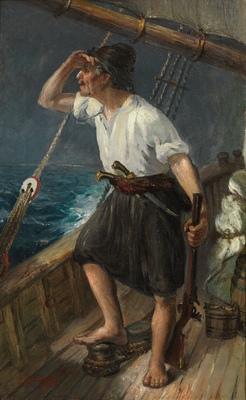 Waiting for the enemy
oil on canvas

Nikitas Grispos was born on the island of Amorgos in 1873.

He studied painting at The School of Fine Arts, Athens under Nikiforos Lytras, Spyridon Prosalentis and Constantinos Volanakis. During this time he also studied sculpture.

His themes included landscape, still-life, portraiture and symbolism. His painting was in keeping with the academic tradition but also employed an impressionistic feeling.