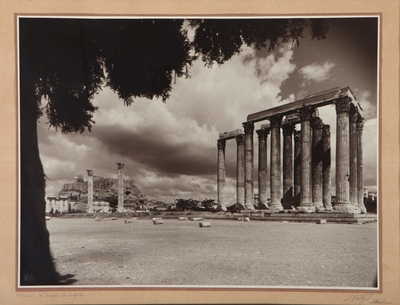 Nelly studied photography in Germany, alongside the great classic photographer Hugo Erfurt and later, Franz Fiedler. She was initiated into the new approach in photography and European Neο-Romanticism.

She began her first studio in Ermou street, Athens in 1924. Her lens captured important personalities and themes of the time. These included the famous dancer of Opera Comique Mona Paeva, (shot dancing nude at the Parthenon), Eva Sikelianou, Dimitris Mitropoulos, (principal conductor of the Metropolitan Opera of New York) and scenes of the Delphic Festival.

Her avant-garde pictures of nude Mona Paeva at the Parthenon were published by the French magazine Illustration de Paris and caused a scandal in the small city of Athens at the time. She was defended by Pavlos Nirvanas in his column in Elefthero Vima newspaper (May 1929).

Her classical education and admiration of Ancient Greek civilization influenced her photographic work on the Acropolis. These images have come to define the artist and have also played a part in the history of photography and architecture.

During World War II she went to the United States, where she stayed for twenty seven years. The Metropolitan Museum of New York bought a large series of her Acropolis photographs.

In 1966 she returned to Greece and presented her work in numerous exhibitions, the last being ‘Nelly’s: The Body, the Light and Ancient Greece’, which was the official Greek participation in the Cultural Olympiad of Barcelona in 1992.
PAVLOS (Dionyssopoulos)