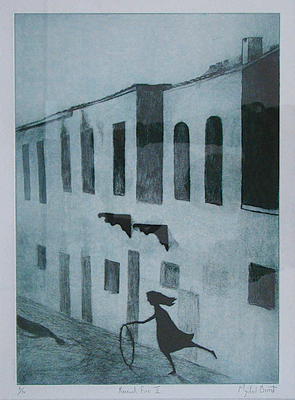 NOTE These prints are dry points where the drawing has been made directly on the aluminum plate with a diamond-pointed scribe, sandpaper, and steel wool. The burrs and rough areas created hold the ink and they have been printed in an edition limited to ten prints.Statement by Myckael Barratt from the catalogue The Green Line, Cyprus 1974-2001 “Give renewed fire to our extinct spirits And bring all Cyprus comfort Othello” In Renewed Fire I & II “I wanted to use inspiration gained from Doros Partasides’ powerful and moving photographs without simply redrawing them. I decided to combine his imagery with evocative figurative elements from Goya’s etching ‘The Sleep of Reason Produces Monsters’ and De Chirico’s painting ‘The Mystery and Melancholy of the Street’, which echo the moods of the photographs. These works have always inspired me, and I was excited by the interplay between their haunting imagery and the break and devastating settings taken from the photographs.”
Myckael BARRATT